"The Citadel was protected by the Guardians, massive compared to a human, which the ancients considered to be minor deities sent by the Great God to guard their water supply. They were feared and worshiped by the Citadel Monks of The Oasis."

The God Robots (later renamed Guardians) are based on a number of influences, mostly ancient statues of Greek, Roman, African and Oceanic origin. And of course my general love for giant robots started at a young age with Goldorak (the french version of the Japanese robot Grendizer by Go Nagai) The first in the set was specifically inspired by Ray Harryhausen and a statue that sits in the De Young Museum in San Francisco. The robot was fully modeled in 3dsmax, but since it was only going to show up in a couple of paintings in the book, all its texturing was done in 2d to save time. Later on, it ended up appearing in far more paintings than planned, so in hindsight doing a full 3d paint job would have probably been the better course. Ah well. 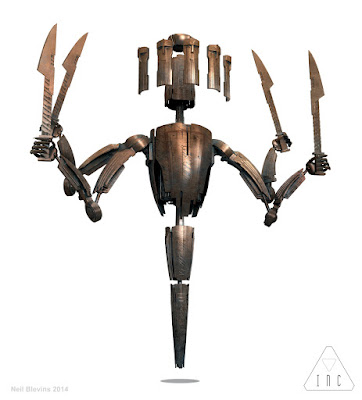 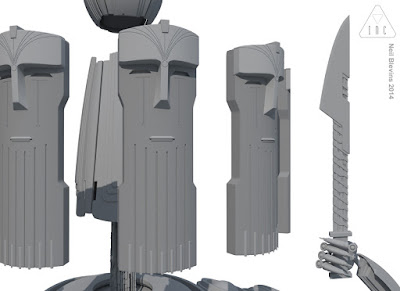