The Soulburnscripts is a suite of tools for 3dsmax that I initially wrote back in 2002. A little background, I worked from 1999 - 2002 at Blur Studio in Venice California, where I helped write the Blurscripts. Once I left for Pixar in 2002, I could no longer maintain the Blurscripts for obvious legal reasons, so I wrote a whole new set of tools from scratch, and released them publicly that year, dubbed the "Soulburnscripts". I have supported and added to these free tools over the last 18 years, and I am honored that they have been used at a bunch of vfx houses, videogame companies, and by dozens of freelancers on projects too numerous to name.

Well, all good things sadly must come to an end. As many of you have read, Autodesk is going 100% rental only in May 2021, and this means that the Soulburnscripts will be discontinued at that time.

So since max 2022, which will likely be released Apr 2021, will be the last version of the software I can buy with my maintenance plan, I can no longer continue to develop or maintain the scripts after that time.

So what does that mean for you, the user of the scripts? In April 2021, I will release one last update to the scripts, compatible with 3dsmax 2022. No further update will be released. I will keep the scripts in that form on my website in perpetuity, frozen in time. The good news, scripts don't need to be recompiled, so they should work in future versions of 3dsmax. At least for awhile. It is likely that 3dsmax will eventually change the location of where the scripts need to go. Or change some maxscript calls that will cause the scripts to no longer function. If that's the case, then they are truly dead. If someone who has bought the rental only version of 3dsmax wants to modify the script pack to be compatible with later versions, and wants to distribute it for FREE on their website, be my guest. But my involvement will end April 2021.

Some people have asked why I don't just get myself on the 3dsmax beta so I can continue to get the software for free without having to get the rental only copy. That to me is not what this is about. I am taking a moral stance here. I do not want to participate in a rental only system. Just because I might be able to avoid it doesn't make it ok that other people cannot, I do not want special treatment, I want all customers to be treated fairly.

A number of people have also asked would I consider moving to new software like Blender. If I was still a kid in college, the answer would be yes. But I have a family and full time job, and as such, do not have the spare time to both learn a brand new 3d package to the same level I know 3dsmax, and no time to port over all of that code. This is a fact Autodesk is actually counting on. They know it's tough to relearn everything, and so they use that to persuade you to take the easy route and just buy in to their rental only scheme.

My plan is to use 3dsmax 2022 until I retire 20 years from now. :) Yes, it's possible that 10 years in the future my computer will give out and I will no longer be able to use my copy of max. If that's the case, then yes, I may move over to new software, since I will have no other choice. But that's a big if, and its very far away. I will say that my last copy of Photoshop was CS6, since they also moved over to rental only, and here I am 8 years later still using CS6, the latest version of the software has almost no features I would need to do my artwork. So I am hoping to have a similar experience with 3dsmax.

In closing, I would like to thank each and every one of you who has used this software, sent me bug reports, asked for new features, given me a donation, or just been a part of the 3dsmax community. I started with 3dstudio DOS and joined the community on Compuserve back in 1994-95, and have been a proud member of the 3dstudio community ever since. I have had a chance to work with or meet so many amazing people thanks to this community, from the original people who made the software, to the super users, to the next generation of 3dsmax developers and designers who picked up the mantle. A huge part of who I am today is because of our strong community, and I have been very sad these past few years watching it slowly die off. But change is inevitable, and not all change is good.

I will continue to post artwork and cg educational material (mostly 2d stuff now) for the rest of my days, so I hope you continue to follow along. Below are my various social media contacts. Let's raise a glass to the 3dsmax that we all knew and love! It's been quite a run. 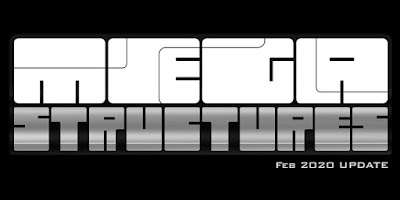 Welcome to the second official Megastructure Book Project Update! For those new to the project, Megastructures will be a visual encyclopedia of scifi megastructures, everything from orbiting space habitats to solar system spanning stellar engineering projects. Each structure will include a scientific explanation, followed by paintings and diagrams that bring the concept to life.

The project is going well, with a lot of progress since we last spoke. The goal is to have all the artwork done by the end of 2020, and focusing on publishing it the following year.

In November, 43% of the artwork was completed. 3 months later, we are now at 62% done! In those 3 months, we now have finished art for the Polyhadral Habitat, the Orbital Ring, the Discworld, the Topopolis, the Space Farm and the Hoopworld. 18 structures to go!

We've also added 6 guest artists to the list, who will contribute 10 structures. Will give you a list of these artists in the coming months.

No art sneak peak this month, want to hold back the art until we get closer to the end of the project. But I'm excited to show some new work, as well as the awesome work of the guest artist contributors. Thanks for following along, we're really excited about getting this book complete!