The Inc Redesign Has Started

The Inc redesign has started. We're keeping the arms and legs the same (since they are time consuming to re-rig) and the face the same (since that's Inc's soul) but the rest of the body is going through a major overhaul. 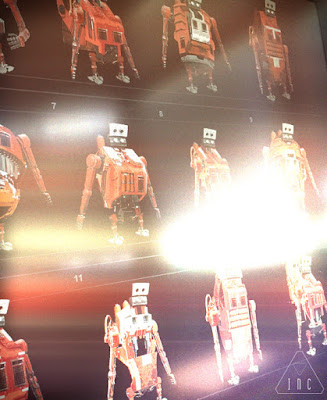 The scripts have been now fully tested in Max 2018!

circleArrayMaker: Fixed a bug where a rounding error would cause the copies to be rotated an incorrect amount.
pipeMaker: Added ability to fill a box with the pipes. Added ability to collapse the joints into your original pipe, so that moving the pipe will also move the joint.

http://www.neilblevins.com/cg_tools/scripts/3dsmax/soulburnscripts.htm
Posted by Neil Blevins at 7:01 AM No comments:

So, we have some bad news. The Kickstarter for the Inc Book has been canceled until further notice.

On friday, we got contacted by a company that said the design of Inc the robot infringes upon their IP. Design is a complex process, make something too unique, it loses the audience. Make something too generic, it's boring. We had felt we had made a unique enough twist on a very tried and true design, a design theme that has show up in a number of robots throughout the years that we all know and love, that we didn't think anything like this would be an issue. We would never claim that Inc the Robot was created in a vacuum, we have always been very open about our inspiration and design process, and really weren't expecting or looking to step on anyone's toes.

Since a long drawn out battle wouldn't be good for anybody, we felt the professional thing to do was to re-design the Inc Robot for the project, and honor their request for us to take down the kickstarter. While Inc's design was intrinsic to the story we wanted to tell, there are other forms that he could have that can tell the story equally well.

We are not quite sure on the timeframe, or whether we'll do another kickstarter or use another channel to release the book, but we can promise that this is not the end. And we'll keep you informed when the future becomes more clear.

Thank you again so much for those of you who pledged for the kickstarter, for those who helped spread the word, for those who have helped us in our artistic careers in any way, you all rock, and we apologize that the road for this book has been far more complex than we ever could have imagined.
Posted by Neil Blevins at 9:46 AM No comments:

Hey everyone! So first off, thanks again for everyone who has donated so far to the Inc Kickstarter. In fact, we recently got named by Kickstarter on their "Projects We Love" list, which is very cool indeed!

We just hit the $2500 mark, and I promised an image from the book, so here ya go, the aliens arrive through the warp gate. Please keep those pledges coming, you get an almost 200 page art book for $20, lets get this thing printed!

"Once on the bridge, I looked out the view screen to see that we were flying past what would seem indescribable."

Posted by Neil Blevins at 6:41 AM No comments:

Ladies and Gentlemen, the Inc Book Project Kickstarter has begun. Click below and order your copy today!

Posted by Neil Blevins at 9:29 AM No comments: