A collaboration between myself and the Midjourney AI. These images started as an older painting of mine, I then modified them using a text prompt in Midjourney, the AI provided me with a bunch of variations, then I painted over top one of those variations using Photoshop. My goal is have the AI assist me rather than replace me, trying to find that balance between my own artistic ideas / style and that of the algorithm. 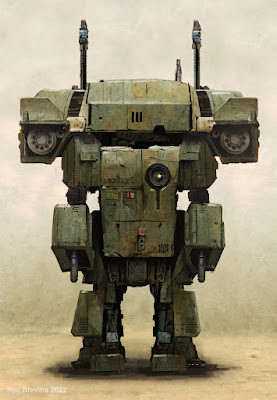 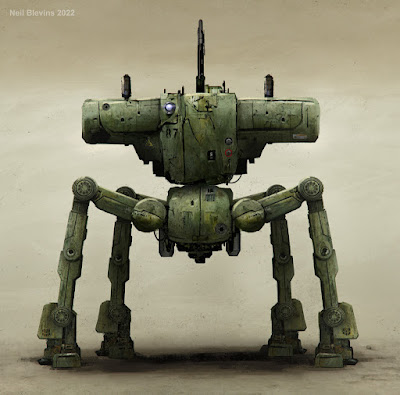 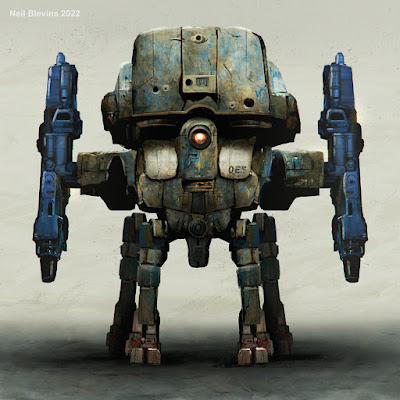 Posted by Neil Blevins at 11:13 AM No comments:

Another AI / Neil collab. Started with a rough painting I did of a spaceship, the AI provided 8 variations, I then photobashed elements of a number of these paintings together to make the final design. 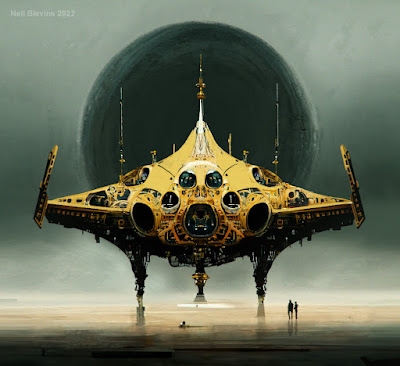 Another AI / Neil collab. Started with a rough painting I did of flowers, the AI provided 20 variations, I then photobashed elements of 6 of these paintings together to make the final design. 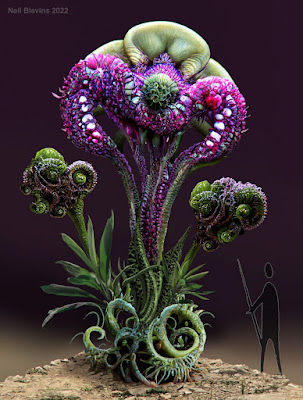 Posted by Neil Blevins at 6:22 AM No comments:

I'll have a table at this year's Lightbox Expo, the show is back in person after 2 years of online only. Will have books and art prints for sale, or just come by to say hi! Tickets now available https://www.showclix.com/event/lightboxexpo2022 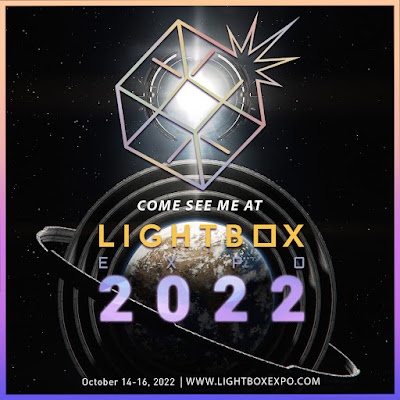 Posted by Neil Blevins at 6:57 AM No comments:

Just a quick little update, I received my promo copy of the 2 book types via airmail. So happy to see them in the flesh (or is that in the pulp?) Check out these pics I took. Will post again once I have the boat information. 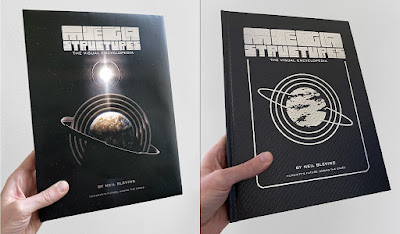 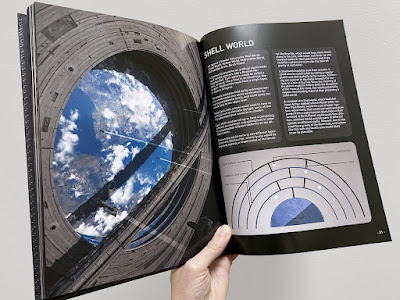 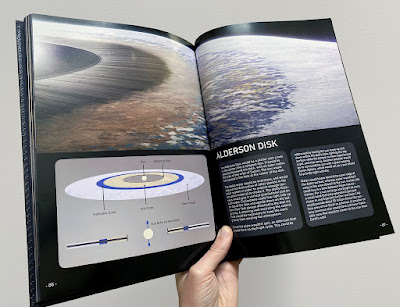 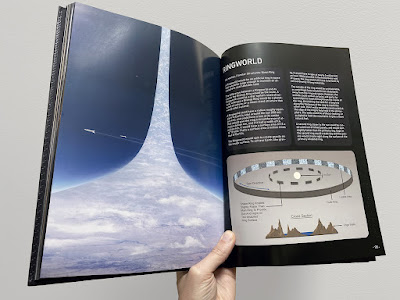 Posted by Neil Blevins at 12:32 PM No comments:

My time experimenting with AI is done, now it's time to make some real art with these tools! These started as older paintings of mine, modified using a text prompt in Midjourney, then painted over top in Photoshop. Approx 50 / 50 AI and hand painted / photobashed. 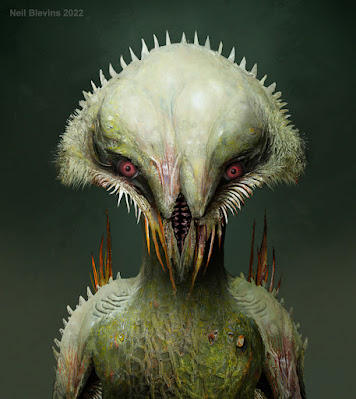 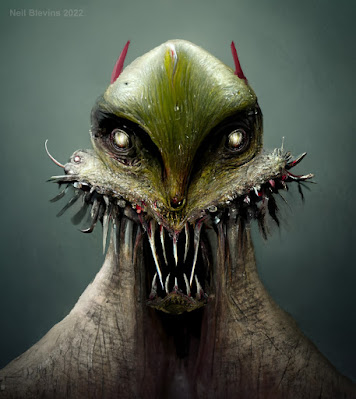 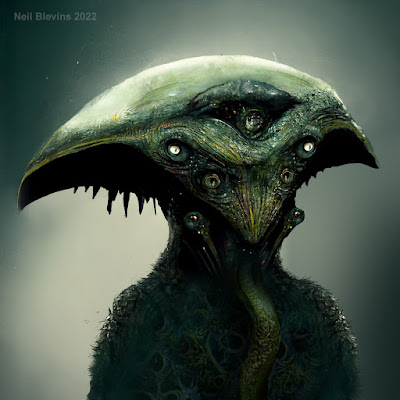 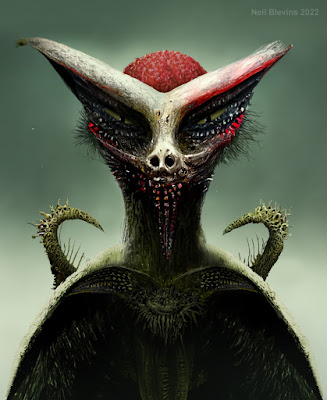 Posted by Neil Blevins at 11:47 AM No comments:

When working on a Scifi or Fantasy project, and you need to create a new species that feels coherent and believable, the first stage I usually go to is to define the species Shape Language, Patterns and Symbols. From there, so many other design choices just fall into place, and the final results tend to be more consistent. So this lesson is a discussion of one of my latest environmental concepts, and showing how Shapes, Patterns and Symbols were used to define and strengthen the story and design of this species. 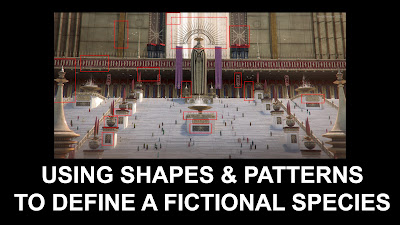 Posted by Neil Blevins at 7:17 AM No comments:

If you're a student using a 3d application such as 3dsmax, Maya or Blender, you've likely had a single scene which contains all your objects for a particular shot, and you've likely worked on it exclusively by yourself. But that's not how things are done at bigger film and game companies, where you have a large team that needs to share pieces of this scene, working on top of each other to create the final shot or game level. So this tutorial is a quick primer discussing the theory behind Asset Management so if you work at a bigger studio you have some idea of how you're going to slot into the system. 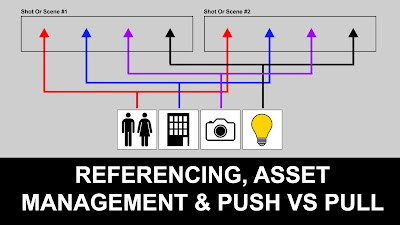 Posted by Neil Blevins at 8:30 AM No comments:

AI Artwork, The Road Ahead

If you've been following social media these last few months, you've probably come across a ton of artwork generated by Artificial Intelligence. AI can take two different images and mix them in surprising ways, it can shade a line drawing, or it can even generate artwork by providing it a line of descriptive text. Tons of artists are starting to play with this sort of software, including myself, and so I felt now was a good time to go over some of what these sorts of applications can do, and have a brief discussion of where this may all be leading us. 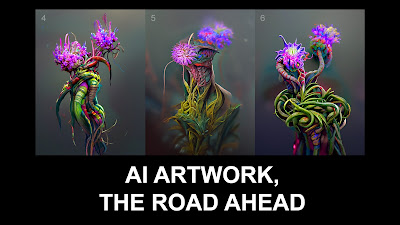 Posted by Neil Blevins at 7:27 AM No comments:

Was invited to be a part of a project a friend has in the works merging tech & the baroque. As a fan of the 1984 Dune film aesthetic & artists like Juan Gimenez, I jumped at the chance & started developing this alien species. Will add to their culture & planet as time allows.

The first image is an environmental concept shows off the homeworld, architecture inspired by baroque, artdeco, and a touch of Southeast Asia.

Second image shows off one of the alien species environmental pods, allowing the ambassador to survive on planets that do not share their same biological needs

Third is a rough painting showing off a forest on the planet. Worked to find recognizable shapes in the plants, but with a few surprises.

And the fourth image shows the thought that went into the shape language, symbols and patterns that make up the planet's visual language. 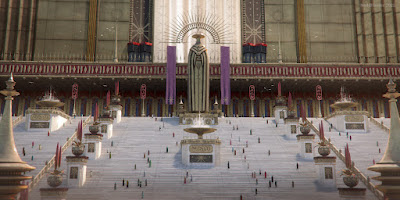 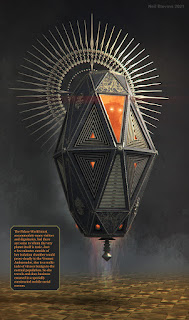 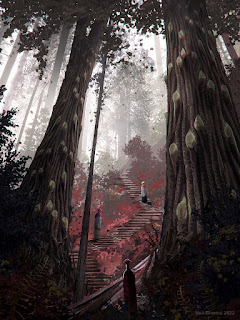 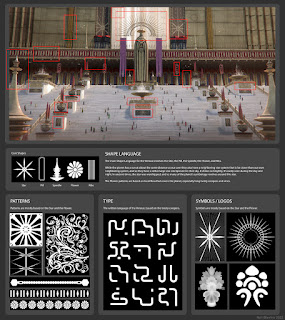 Posted by Neil Blevins at 7:41 AM No comments: