The first of a new series I'm working on, Megastructures will explore a number or larger than life scifi engineering projects.

We'll start with The Ringworld, CATEGORY: STELLAR SCALE. A Ringworld is an artificial ring in space large enough to maintain an atmosphere and habitable land. The ring spins to create g-forces, and inner walls could be used to hold in the atmosphere. “Stellar Scale” rings could have a radius roughly equal to the radius of the Earth's orbit around the sun, and could in fact have a sun at its centroid. 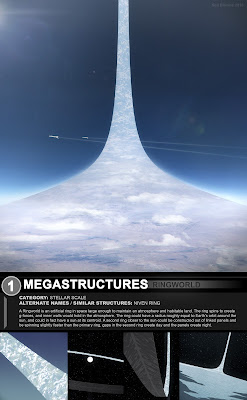 Posted by Anonymous at 8:50 PM No comments:

Wanted to give a little shout out to Romain Chauliac, who has posted a great hard surface modeling / texturing / lighting tutorial available here:

This tutorial is epic, you get to watch him timelapse style go from nothing to a pretty spectacular image (no audio, but the visuals are pretty self explanatory).

He starts off subdiv modeling, its all in maya but all of the stuff he's doing is pretty standard in any software package from 3dsmax to modo.

He then goes through the process of setting up UVs for the model, since his goal is to move it over to Substance Painter for texturing. My god is this part tedious! Apparently the process took close to 10 hours to set up good uvs on all of those tiny pieces. And this is no slam on Romain, he's a real pro and does a great job, this is a slam on UVs and the pipelines that rely on them. As you're probably aware, I am a big fan of UVless methods, and I can think of no greater example of why then to watch the process of setting up UVs on this mesh. In fact, I challenge the makers of Substance Painter to watch the UV process in its entirety in realtime, and then tell me why they can't implement PTEX in their software!

Once this process is complete, he moves over to Substance for his texturing. Other than the gruesome uv requirement, I really dig how he goes about texturing the mesh. A little hand painting here and there, but for the majority its procedural texturing using Curvature, Triplanar Projection (Blended box maps) and Ambient Occlusion to drive noises. And their system for blending between materials is really intuitive.

He then goes into Cinema4D and sets up the final shaders using the maps baked out of Substance Painter. Then some lighting and rendering in passes, and final composite in Nuke.

If you want to learn about complex hardsurface modeling and shading, this video is a great resource, you even get the model and maps as part of the package. Highly recommended, thanks for posting this Romain!
Posted by Anonymous at 9:10 AM No comments:

Interviewed for The Good Dinosaur

It's Art did an interview with me on the making of Pixar's The Good Dinosaur. I discuss our work doing Visual Development and then Sets, lots of pre-production artwork from myself and the talented Pixar team. Check it out, and thanks to Patrice for the interview!

http://www.iamag.co/features/making-of-the-good-dinosaur-exclusive-interview-with-pixar-artist-neil-bleivins/
Posted by Anonymous at 9:52 AM No comments:

“Your confused friends out there have been sipping from a leak when they could have been guzzling from a firehose if they just had the courage to take a look.”

Another painting from the Inc book project. Ever since the film Dune, and that spectacular shot of the Guild Heighliner above Caladan, I've always loved the image of a giant spaceship hovering in a planet's orbit, I could paint them all day, it raises such juicy "What's going to happen next" type questions.

My usual combination of 3d, photos and hand painted in photoshop. The most time consuming was the planet, as I had to make it up of dozens of individual cloud images, then warp them to the contours of the planet. Posted by Anonymous at 7:51 PM No comments:

Many times the best way to get dramatic lighting in your painting is to reference the real world, so this tutorial discusses how I used the lighting from two photographs in two paintings of a sci-fi scene from my book project Inc. 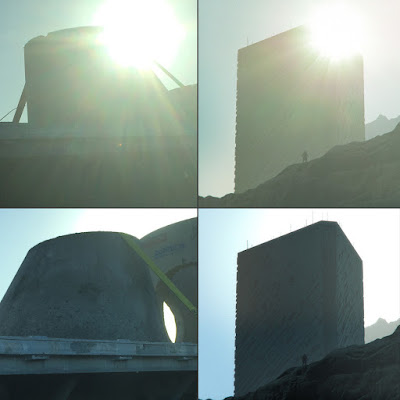 Posted by Anonymous at 7:10 AM No comments:

Posted by Anonymous at 2:10 PM No comments: