Come visit me at the Emerald City Comicon in Seattle! (sharing a table with fellow Blur studio alumni, the amazing Chuck Wojtkiewicz) Come hang out March 14-17th, say hi, and buy a copy of "The Story Of Inc" and some special fine art prints! 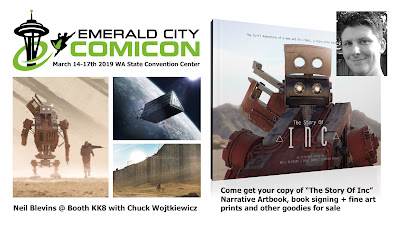 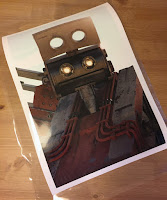 Posted by Neil Blevins at 7:40 AM No comments:

A little blast from the past. Before we chose our final logo for "The Story Of Inc" book project, a lot of logos were tested and discussed with the team. Here's a bunch of Logos that didn't quite make it.

Posted by Neil Blevins at 10:46 AM No comments:


Speculative Fiction Reviewer James Davis Nicoll first proposed the Nicoll-Dyson Laser as a weapon where the satellites of a Dyson swarm surrounding a sun act as a phased array laser emitter capable of delivering their energy to a planet-sized target at a range of millions of light years.

The laser could do anything from wiping out the atmosphere on the target planet to cracking the planet in half depending on the focus of the beam (a collimated beam would be the diameter of the Dyson sphere used to generate it, whereas a focused beam could be more concentrated). Other factors that could effect the beam’s intensity include the size and energy output of the sun surrounded by the Dyson Swarm, the efficiency of the swarm’s solar energy conversion, and the amount of time the laser was pointed at the target planet. 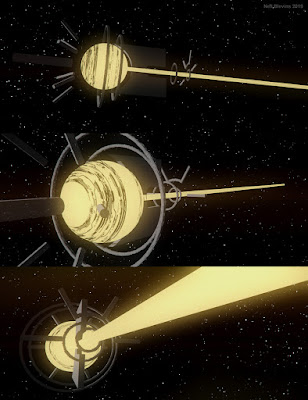 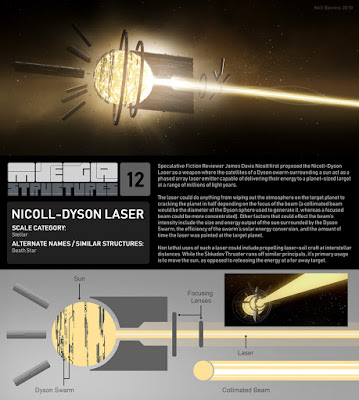 Posted by Neil Blevins at 5:08 PM No comments: