As some of you may have noticed, the Megastructures project now has a new logo, lovingly crafted by typography addict Susan Bradley (http://susan-bradley.com/), with whom I had the pleasure of working at Pixar years ago. We were hoping to channel some of that 70s-80s scifi logo spirit, while still remaining modern.

As this project transitions from a personal art side project to full fledged book, expect to see others join the project as we move forward, and lots more news as the details of the book get worked out. In the meantime, thanks Susan for your awesome work on the logo!
Posted by Neil Blevins at 2:22 PM No comments:

A Rungworld is an orbital structure that links together several hundred McKendree Cylinders into a ring that resembles a bent ladder. The ring could float in space, surround a planet, or have a star at its centroid.

Unlike the Ringworld, spinning the entire structure for gravity wouldn't be necessary as each individual cylinder is spinning around its own axis to provide spin gravity to the cylinder's inhabitants. Cylinders could be added or removed from the overall ring as needed, the remaining cylinders would adjust their spacing to compensate.

Each cylinder could be a nation state, with wildly differing landscape and climate, even differing atmosphere if alien races were included. Fleets of spacecraft would travel between and trade goods with neighboring cylinders. 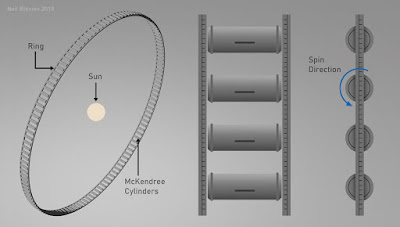 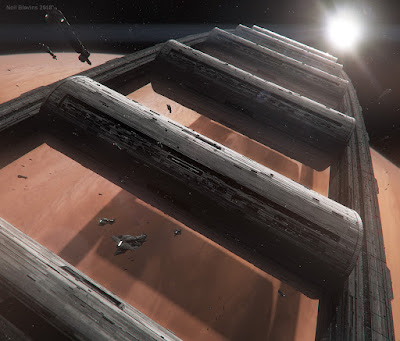 Posted by Neil Blevins at 4:21 PM No comments: