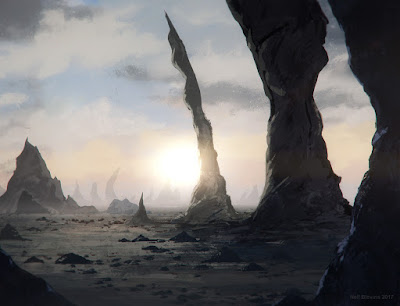 My good friend the Spiky Alien Landscape has been getting a lot of grief lately, and I wanted to add my opinion to the chorus of people discussing the subject. The main reason its getting poo-pooed is because if your goal is to make a portfolio that will get you hired as a concept designer, filing it with Spiky alien landscapes won't get you very far. They don't really have much in the way of design. They can show you know how to paint or photobash. They can show you know a thing or two about light and atmospheric perspective. But as an actual IDEA goes, they tend not to be very deep. So I agree completely that a portfolio filled with these things is not going to get you that dream job as a designer. But that said, for practice, for fun, for relaxation, for sheer visual joy, the Spiky Alien Landscape is just what the doctor ordered. So don't stop making these landscapes, they have their own place in the world of art and I do enjoy them dearly. But just remember, design is about ideas, its about coming up with a new take on subject while still grounding it in reality, it's about function and how that affects form, and there are many many other subjects that show off these skills far better than the Spiky Alien Landscape. Use our Spiky friend wisely. This landscape was inspired by a painting I saw in the Louvre on my recent trip to France. 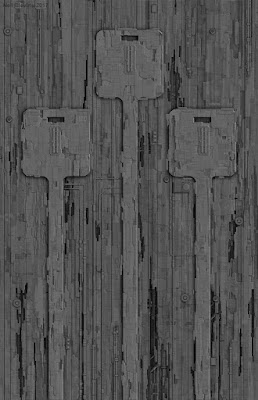 One of a number of starship hull test images. I made these images to explore variations in greebling and hull plate shapes and configurations. The tests are a little less practical and a little more abstract, but they have been really helpful, and should be a great source of inspiration and practical experience the next time I decide to make a full fledged 3d model of a starship, space station or even a mechanized planet. 90% of this is painted in 2d inside photoshop, some pipes are rendered from 3dsmax and then photobashed into place to create more complex configurations, and many patterns were inspired or produced by Darktree, Bercon Noise and Filterforge procedurals.

Posted by Neil Blevins at 5:51 AM No comments:

Thanks for everyone who attended the IAMAG Master Classes 2017


I just wanted to say a huge thank you to Patrice and Ben for organizing and inviting me as a speaker to the IAMAG 2017 Master Classes, I had a great time. Also a huge thanks to everyone who watched and gave me feedback on my talk: "The Story Of Inc: Developing Your IP with an Illustrated Novel", all the students who came by to get a critique, and all the other speakers, who not only gave excellent talks, but were also extra cool at the dinners and hang out events afterwards. Here's a few highlights from the show...

Talks:
- Goro's VR talk: First off Goro is just the most enthusiastic guy ever, seeing him work in Quill in VR was just a pleasure, how fast and natural he was, he gives a really great sense of where the tech is going in the future. If you haven't painted or sculpted in VR yet, find a way to do it, it's fantastic.
- Dan Roarty's talk: Trying to pull off texturing a realistic human head in 60 min is no small feat. And don't worry Dan, mudbox is awesome, you don't have to apologize for not being a zbrush user.
- Nikolai Lockertsen's talk: I learned a whole ton of tips on using Procreate for my sketching. Love the perspective assist. And he's a super nice guy too.
- Sandra Pilny-Lockertsen: Many talented artists who didn't give a talk also attended, and had many great discussions with them about life and art. It was really interesting hearing about the similarities and differences making films in a small market like Norway vs the large US market. And just learning in general more about the story boarding process.
- Mike Blum's talk: With all the focus on big prominent blockbuster animation, it's easy to forget sometimes that there's a huge amount of smaller animation going on for Comedy Central, Adult Swim etc. There's a lot of talented people in this space showing off alternative styles and ideas that really should get more attention.
- Andrew Schmidt's talk on directing, I knew Andrew from Pixar but it was great hearing about what he's been up to since he left for a career in directing animated TV for dreamworks. A lot of great advice on what directing is really about.
- Ryan Church's talk: The sheer volume of quality work Ryan showed at the talk was incredible, honestly, only a hand full of images end up in the art of book, wish they were all there.
- Nathan Fowkes: The thing I've loved about Nathan's work for so many years is how rough and brushy it feels, he captures light with just a few strokes of his traditional or digital brush. And I found out he's also a big hard scifi fan :) Nathan does a lot of teaching, if you ever get the chance to take one of his courses, I can pretty much guarantee you will learn tons.
- Sadly, due to scheduling, I was unable to see all of the talks. I was able to see about 15 min each of Ash Thorp's talk and Jason Scheier's talk, Ash's talk about his current projects and inspiration started off really strong (and he's an Eastman & Laird TMNT fan!), and my wife who got to watch all of Jason's talk and she said it was excellent. The part I saw was great, I love analyzing film. I got to hear some of Allan McKay's talk from back stage, and he got into a lot of nitty gritty about the business of VFX, a topic that doesn't get discussed enough, it's so important. And I was really bummed to miss Marc Simonetti and Raphael Lacoste's talks because I was manning the portfolio review area, both are spectacular artists who I've followed for a long time, and I got a chance to hang out with Marc a bunch in the evenings and he's a super nice guy. Thank goodness we can watch the talks on video afterwards. Not as great as seeing them live, but will work in a pinch, I look forward to watching them all.

Q&A:
- Ian McQue's Q&A: It was awesome hearing this guy's professional story, a story of too many sequels that finally persuaded him to find creative freedom in his own artistic projects, and those projects ended up being wildly successful, which sent him down the path of fulltime freelance. A good lesson for us all.

Student Portfolio Review:
- I got the chance to review and critique dozens of student portfolios, and I found it really interesting. There's certain strong points that I saw in most of the portfolios, but also the same things that need work kept appearing again and again (cinematic lighting, variation in line weight, portfolio organization, etc). I have a much better understanding now of where the schools are excelling and where the schools may be lacking, and hopefully that knowledge will help me focus some of my educational materials a bit more to help out in those areas.

Also met so many other amazing professionals at the parties, students, people's significant others, people's kids. Thanks to everyone for coming. There was some discussion about whether the conference should expand (it was 21 presenters and about 300 people), but I felt that the size was kind of perfect, it allowed everyone to make real bonds with each other, get a chance to talk to each other frequently more than once, compare notes, it just felt more personal than say a 70,000 person siggraph.

If you didn't attend, you can buy access to the recordings of the talks here: https://www.iamag.co/features/masterclasses17tickets/ Learn all about how the team made the Inc Book Project, and 20 other great talks by professional artists!
I can only imagine next year will be even more kickass.
Posted by Neil Blevins at 6:58 AM No comments:

Hey everyone. So this coming Sunday (March 19th) is the weekend I'll be at IAMAG 2017 in Paris France giving an hour long presentation called "Developing Your IP with an Illustrated Novel". It will cover the creation process of the Inc Book project, I will be discussing how we made the imagery, wrote the story, talking about all the things you need to know about making your own book, working with publishers, business considerations, showing off a ton of never before seen art from Inc, and if there's time at the end, perhaps a live painting demo. The conference will feature 21 artists in total, some amazingly talented people will be there (Ryan Church, James Clyne, Ian McQue, Raphael Lacoste, and many more), artists from all different walks of life. Check out the official site below, come grab a last minute ticket, and hope to see everyone there!

http://www.iamag.co/features/iamag-master-classes-17/
Posted by Neil Blevins at 7:21 AM No comments:

Working on a new IP called Space Jumper, more on that in the future. In the meantime, here's a Rough Line Sketch and Rough Painting for a giant robot that will feature in the property. All painted in photoshop. 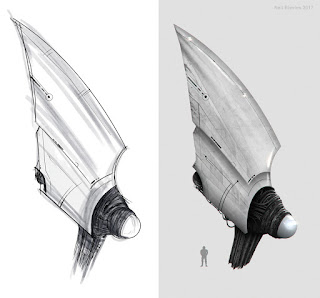 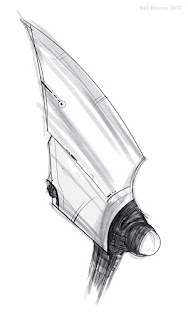 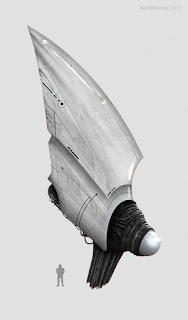 Posted by Neil Blevins at 6:53 AM No comments: