Two new paintings from the book Megastructures: The Visual Encyclopedia.

A Dyson Sphere would be a structure that would enclose a sun to capture the majority of its output energy. The energy could be used for various purposes, such as powering supercomputers, providing a living area for its inhabitants, and other industrial uses. It would come in three varieties: a Dyson Swarm/Ring, a Dyson Bubble, and a Dyson Shell. 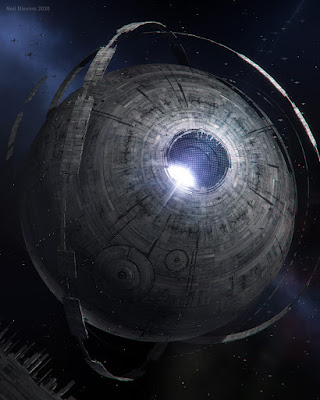 An Orbital Shipyard would be a structure that would assemble or repair spacecraft in orbit around a planet. Shipyards would likely be modular and expandable to accommodate more ships as needed.

If human workers were onboard, a segment of the shipyard could be spun to provide gravity, with the zero G areas reserved for work purposes. But considering the cumbersome nature of spacesuits, the need for oxygen, and that certain types of assembly would require a larger crew, it’s more likely the shipyard would be manned by a series of drones and robots. Drones could be controlled by shipyard personnel, either on the planet or in the shipyard itself. Giant 3D printer modules would manufacture necessary components, which would be placed and welded by robots and drones that would fly and crawl.