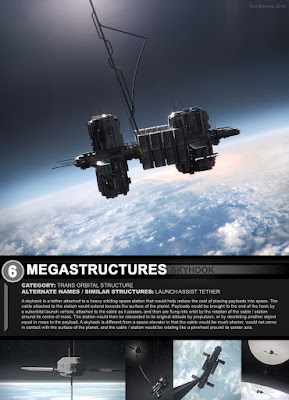 A skyhook is a tether attached to a heavy orbiting space station that would help reduce the cost of placing payloads into space. The cable attached to the station would extend towards the surface of the planet. Payloads would be brought to the end of the hook by a suborbital launch vehicle, attached to the cable as it passes, and then are flung into orbit by the rotation of the cable / station around its centre of mass. The station would then be reboosted to its original altitude by propulsion, or by deorbiting another object equal in mass to the payload. A skyhook is different from a space elevator in that the cable would be much shorter, would not come in contact with the surface of the planet, and the cable / station would be rotating like a pinwheel around its center axis.