A Bishop Ring is a space habitat similar to but much smaller than a Niven Ring. Instead of being centered around a star, it is orbiting a star or planet, thus has a much smaller diameter.

It was first proposed in 1997 by Forest Bishop of the Institute of Atomic Scale Engineering. The original proposal would have it be 1000 km in radius and 500 km in width, although other proportions would be possible.

The ring would spin to produce artificial gravity using centrifugal force, and would not need to be enclosed as is the case with other spinning space habitats, as it would be large enough for the atmosphere to stick to the surface through gravity and possibly an atmospheric retention wall.

By giving a tilt to its orbit, you could achieve a natural day and night cycle, or illumination could be achieved using mirrors or an artificial sun at its center. 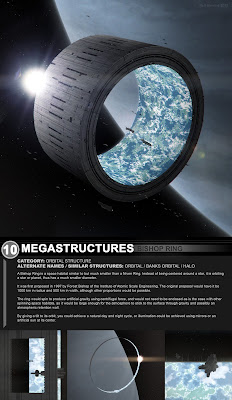 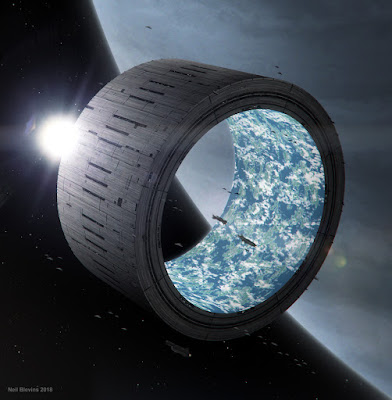 This is very cool. It has many of the benefits of a ringworld at drastically lower cost. Nice art work to go with the idea.