A Seastead is a man made island that contains a full city. The structure could be an extension of an existing city, attached to the shore, it could be separate from the mainland but attached to the ground in shallow waters (like an oil rig), it could be a fully floating city far from the coast, or it could be a motorized city that can be moved from location to location on the water (like a giant cruise ship). If floating, it’s likely you’d still have enormous retractable cables to anchor yourself to the sea floor.

A sizable amount of the island would exist below the surface of the water as above for buoyancy purposes. Imagine an inhabited skyscraper that’s completely submerged except for the roof, which is the island visible above the water.

A Seastead could be used for any number of purposes, but especially when privacy or secrecy is involved, is a good way to detach yourself from the rest of society without leaving the planet. Imagine hundreds of these detachable island nations, each with their own laws, language or culture, or even eventually differences in evolution if kept isolated enough.

Power could come from solar panels dragged from your island, wind farm mini islands tethered to the main city, or power collectors at underwater hydrothermal vents. Food could come from traditional farming, undersea farming, or fishing.

The city could be configured as a grouping of smaller movable platforms, which would allow you to rearrange and reconfigure the city as needs require, something impossible to do on or in land based cities. 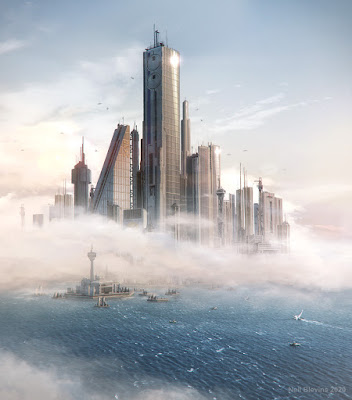 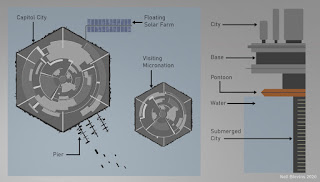