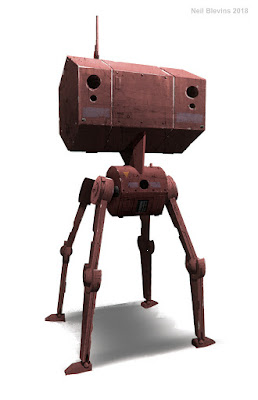 The Spider Walker MK 6, affectionately known as "The Pup", was a Mars military tracker robot. Its head carried sensors of every sort, from telescopic cameras to radar to infrared sensors to footfall detection. It's job was to pursue its target, pinpoint their exact location, then call in a strike team to capture or kill. It also contained a self destruct mode if the strike team couldn't arrive in time, and there was danger of the target escaping. While its large head was excellent for holding all of the tracking equipment, it was also one of its major design flaws, since it made the robot somewhat unbalanced, and a strong blow to the head could lead to it tipping over. Spindly legs allowed it to move fast over a variety of terrain, but didn't help the balance problems.
Posted by Neil Blevins at 9:37 AM